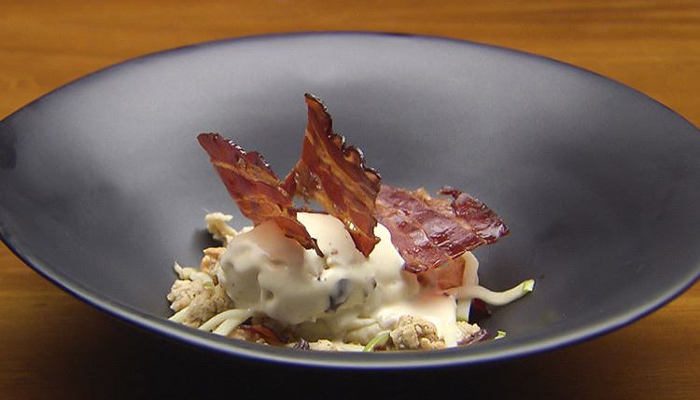 The MasterChef Australia season 9 episode 14 had contestants facing the first Relay Team Challenge of the season. For the Relay Team Challenge, the contestants were divided into four teams. Diana Chan, Benjamin Bullock, Tamara Graffen, and Benita Orwell volunteered for the Red, Yellow, Blue, and Green Team respectively. The volunteers got to decide on the dish their team would be preparing.

The MasterChef Australia Relay Team Challenge saw each contestant cook for 15 minutes, and then hand over the culinary duties to the next team member within 45 seconds. After the team members had reached the 15-minute deadline, they were moved into another room where they could see the next contestant cooking. The contestants also had access to an open pantry for the challenge.

For the Relay Team Challenge, the teams had to use a natural sweetener, the maple syrup. They had to pick aprons from a bag to know which contestant will be a part of which team.

The Green and Blue Teams chose to prepare savory dishes, while the Red and Yellow Teams decided to prepare a dessert.

Where Did Lukman Go Wrong?

Graffen handed over the dish to Tiong who continued the dish well. Tiong then handed it over to Michelle Lukman. Lukman was expecting a dessert, but she was surprised to see that she had to prepare a savory dish.

Tiong had told her to steam the pieces of dough and to deep fry the pork belly. Lukman directly steamed the dough without shaping it and placed it on a baking sheet. Then, she chopped the pork belly into smaller pieces and deep-fried them, which made them dry out quickly.

When Karlie Verkerk took over, she saw that the bao buns were hard instead of light and fluffy and the slaw had turned soggy. Two major elements didn’t turn out well and couldn’t be served. So, she discarded them and prepared pancakes.

The Yellow and Red Teams worked in coordination with their team members to enhance the dish. Both dishes turned out better than those of the other two teams.

The Green Team prepared a dish of Singapore chili crab and prawn. Orwell chose to replace palm sugar with maple syrup in the dish. When Nixon tasted the dish, there wasn’t a remarkable maple flavor, so he decided to add maple syrup to the prawns.

The judges felt that the Green Team’s dish lacked the maple flavor they were looking for, so they will have to face the Elimination Challenge. Either Orwell, Nixon, Stevenson, Ungermann, or Morgan may get eliminated today. To know who will get knocked out, tune into Channel Ten at 7:30 p.m.